Scouting has returned, we are still looking for Volunteers to support our growing groups so please get in touch!!

More information on the early history of the group and specific members can be read in the PDF to the right.

With the introduction of Scouting by Baden-Powell and his publication “Scouting for Boys” many boys across the country started to band together to form their own troops.

We are fortunate enough to have a copy of Harold Robert Overy’s note book, one of the first Abbots Langley Scouts, that he kept during 1909 to 1910 aged 14, and we were able to work through it to find information to identify the boys in the troop at the time, who formed the humble beginnings of our Scout Group, and subsequently enlisted in World War 1.

From a record of registered troops issued by Imperial HQ compiled by County Commissioner Percy Everett for 1909 it lists the troop as having 27 Scouts and 3 Leaders:

Charles Huntingford Bonaker, was the first Scout Master for the Abbots Langley Scout Group and he lived in Lawn House, Hunton Bridge. This is now the Hunter’s Lodge and they have a plaque on the wall commemorating him. The inaugural meeting of the first scout group was on 19th June 1909. Charles was 35, and had been stationed in a nearby region of Africa whilst Baden-Powell was in Mafeking. There is no doubt that he would have been inspired by the vision of Scout Groups forming across the country.

The Assistant Scout Masters who joined at that time were Charles Whittaker, aged 17, who lived in Yew Tree Cottage, Abbots Road (a house that sat between numbers 90 to 96 today) and Frederick Bennett aged 19, who lived at No. 8 Garden Road.

Another influential person at that time was Lieutenant Bramwell Henry Withers, who lived at Mill House, Hunton Bridge.  He founded the Kings Langley and Langleybury Scout Troops and had an illustrious military career. He assisted in the First Class examinations at Abbots Langley Scout Group where he marked map reading, signalling and rescue work.

OWL PATROL
15th June 1909
The first boys noted as forming the Owl Troop together are:

B E Hill (Bertram Ernest) Scout No. 2 and Corporal
Son of William Hill the Draper
whose shop was double fronted in the High Street where Alexandra’s and Your Move are today
Living in the Limes, Abbots Road, now the present day Post Office

22nd July 1909
F C Coleman (Frank Charles)
Living at Homefield, Abbots Road
(redeveloped with houses both sides of exit road from car park
This house would have been opposite the three boys above 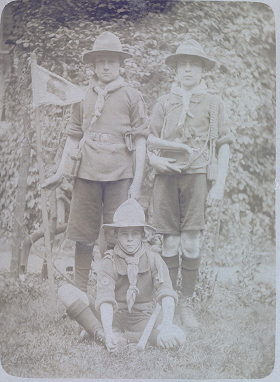 At the meeting on Saturday July 31st 1909 at 5.30pm, it was agreed to buy 5 hats, 5 haversacks and 5 jerseys, and the boys concerned were measured up. Scout Nos. 3 and 6 went to Watford in the evening and purchased the articles and another meeting was held at 8.30 pm when the two Scouts returned where they had a parade in uniform for the first time.

By 1910 they had all subscribed money to buy a Bugle which was obtained for 4 shillings and 5 pence and Patrol Leader R. Welland was voted to be the Bugler.

That same year saw the first census of over a hundred thousand Scouts in the UK and in less than three years, Scouting had reached a firm footing, in which the Abbots Langley group were a part. 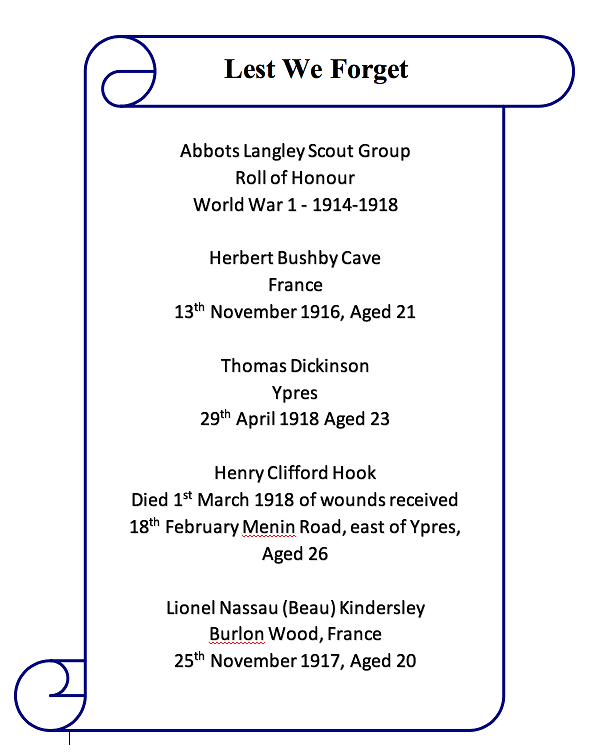 Scouts and Leaders (L) who survived

We have no records between 1910 and 1927 to help us find out much more. We only assume that the Abbots Langley Scout Group continued until the outbreak of The War in 1914, at which time most enlisted and the Group would have disbanded, and was not re-established again until 1927 when Alan MacDonald started it up again.

Just before the end of the War in 1917 Baden-Powell set up a scheme for Senior Scouts, which changed its name to Rover Scouts the next year, for anyone over the age of 18, with Outdoor Adventure and Service as the main part of its programme. We have not been able to establish if some of these men came back into Scouting as Leaders/supporters after the war.

Our first record of a Rover Scout unit in the Abbots Langley Scout Group was 1940, although they had an active Executive Committee and Leaders from 1927 onwards.

What we do know us that Harold Overy presented the Rover Crew in July 1962, with the gift of books, maps and his set of pre-1914 Patrol Leaders Badges, but at the time of writing, we cannot locate their whereabouts.