Scouting activities carrying on under the restrictions advised by the Scout Associates (Scouting HQ Regulations) and where we can we will invite new members from our joining list and will look to bring the section back up to fuill strength as soon as we can.

More information on the early history of the group and specific members can be read in the PDF to the right.

A new group was formed in 1927 by Alan Macdonald (Mac) who ran this group sucessfully for some five to six years. sadly he was tragically killed on his motorcycle on his way to summer Scout camp.

Others took over, too numerous to mention, but perhaps Frank Hoadly should be singled out, who was scout leader for many years and moulded Abbots Langley Scouts into the fine strong group it now is.

In living memory the group building has progressed from a timber and corrugated iron `hut' to the fine two storey brick built hall in Langley Road. (incedentally, in 1969 with the help of parents we formed a building company and built it ourselves.)

The group has over the years travelled and camped in almost every country in Europe, and many members have gone on to explore the rest of the world. 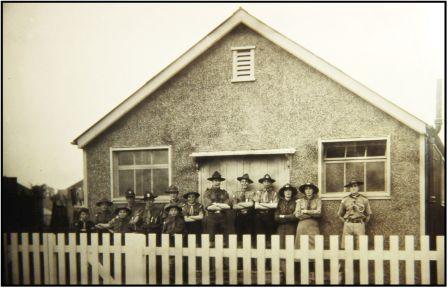